I picked up something to work on over the holidays, courtesy of craigslist. Ladies and gentlemen, Uggo.

I’ve been wanting a new exhaust for Tux for a while now. The factory muffler is enormous, heavy, tends towards rust at the end, and is almost silent.

I’d tried out the inexpensive slip-on Mini-Norton from Dime City Cycles, but it was too flipping loud (distractingly so while moving) and it required a full stack of adapters (and tape!) to make it fit Tux’s exhaust pipe. It also required me to craft a bar to support it from the frame, which left it somewhat unstable, putting more force than I’d really wanted on the exhaust header screws. I ran with it for a day, but had to retire it due to the sheer ear-wrecking volume.

Some time later I happened to run across photos of the RSY Beauty. It’s designed specifically for the TU250x, and rated at a sensible 89dB. Promising!

I ordered it from Web!ke as an early Christmas present for myself, and was surprised to discover upon its arrival that it was actually a full exhaust system, not just the muffler. The exhaust header is stainless steel to match the muffler. It has some built-in baffling just after the port for the lambda probe. The muffler itself has only a minor cage baffle, and is very lightweight. It has a tab that fits with the existing mounting bracket perfectly. It’s louder than the original muffler (which was ridiculously quiet), but not ear-bleedingly so like the Mini-Norton was. It has an overall pleasant tone, nothing too tinny or sputtering. It does suffer from an occasional roll-off pop, but that isn’t a huge deal.

I recorded a short video of my kicking Tux over so people could get a feeling for how she sounds now.

I’m considering wrapping the pipe in black, since it seems to shed a lot more heat than the original pipe had done. It went blue-gold in less than a day! I’ll have to think about it. 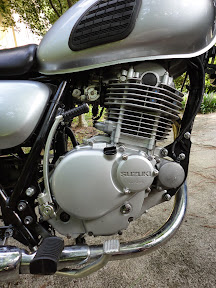 I’ve finally written up and vastly expanded upon the information I originally had been posting in the “Kickstart for the TU?” thread on tu250riders.com. It almost certainly will go through a few more revisions, but it’s in a state now where it may actually make sense to other people!

So check out my TU250x Kickstart page, which details the changes needed, the part numbers, and the work required to make it happen!

edit: I’ve rewritten bits of the guide to make more sense, and I’ve added Amazon.com links to a number of the tools or consumable items that are required to get the job done.

I’ve removed a piece of myself, this morning.

My motorcycle is in the shop this morning. I ride a little TU250x that I call “Tux”. I bought her for myself as a birthday present last year, and have put a little over 6000 miles on her since. She’s a good bike, and I take a lot of pleasure in our rides together. I perform the majority of her maintenance myself – oil, chain, valves, electrical. But one thing I didn’t want to do was replace and balance the tires, so I’m paying the guys at Team Powersports to do it.

While Tux is off getting new tires, my daughter and I are sitting on the back porch. She has been reading Rurouni Kenshin for the first time, and I have been working on the documentation for python-promises.