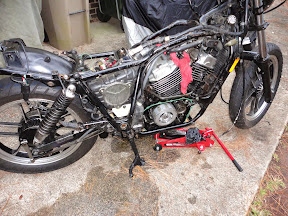 I got a bit more work done on Uggo, this past Friday. It was more of a struggle than it really ought to be, getting myself moving and collected enough to work on anything. I think that I may be suffering from a bit of seasonal depression. Either that or the monumental, overwhelming dread of returning to work is getting to me. Whatever it is, I eventually conquered it enough to drag my tools out to the bike and get my hands dirty.

I started off by draining the oil. It came out thick and grey. This has me a little worried, but not terribly – I’d mentioned before that I had to stuff rags into the intakes, but it’s been miserable and rainy for a while, and condensation has been a real issue. I’ll keep an eye on this after the bike is back together again.

The oil filter had a bunch of big dents in it. It’s in an awkward place, and I had to use a strap wrench and my breaker bar to get it turning, but off it did eventually come.

I then replaced the drain plug, and placed a block of wood and my jack under the engine. I jacked it up enough that the rear wheel was on the ground and then I removed the sub-frame assembly from the right-side of the engine. A pleasant change from the Suzuki, all the bolts save one were identical, and all were 6mm alan heads. One of the bolts was slightly damaged, but I was able to get it to turn out after a bit of a fight.

I wrestled away the side cover, and took a good look around the inside of the clutch side of the case. No obvious bits of metal or anything, so that’s a bonus. The gasket material is going to be a real bastard to get off, as usual. I’ve got a replacement gasket ready to go, once I can get this one cleaned off.

I removed the press-plate from the clutch assembly, and the four springs. I had to do some gymnastics, standing on the back brake and yanking on the breaker bar to get the 24mm nut off of the assembly so I could pull it to replace the friction plates. 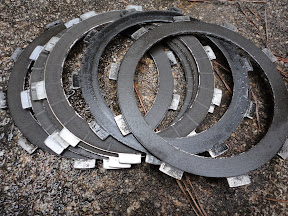 Once I did get them out, the old friction plates were as I’d expected. Three of the plates had been work completely smooth on both sides. The others were nearly there, but I could still make out a tiny indentation between the friction material pads on them. No wonder it slipped!

I installed the new plates and re-assembled the stack and assembly, and performed more gymnastics to get it back attached to the countershaft. This is a very awkward arrangement – I much prefer the Suzuki for clutch plate maintenance – just remove the five bolts over the springs, and you can slide the pressure plate right off and remove the plates! Oh well, it’s not like this is a particularly frequent check.